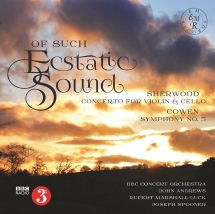 John Andrew conducts the BBC Concert Orchestra in Cowen's Symphony No.5 and Sherwood's Concerto for Violin and Cello with soloists Rupert Marshall-Luck and Joseph Spooner. Sherwood's Concerto for Violin and Cello was written at the height of his career in Germany, being completed in 1908; evidently influenced in some measure by the Double Concerto of Brahms, the work is, nevertheless, characterised by very different harmonies and textures and a distinctly late Romantic lyricism. Intricately crafted, it displays a dramatic verve in its outer movements that complements the passionate lyricism of the second movement. It is presented on this disc alongside Frederic Cowen's Symphony no.5 - composed at the request of the Cambridge University Musical Society and first performed under Cowen's baton in 1887, it received its first professional performance later that year at a Royal Liverpool Philharmonic Concert. It is a work full of colour, songfulness, energy and drama.