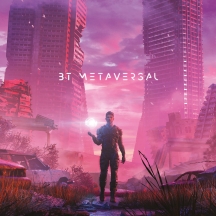 There's simply never a dull moment in the world of BT - from his landmark studio albums. live performances, technical prowess in the studio, soundtrack scoring, to his penchant for bringing the future forward to the present - it's all incredible. Now, we open a new chapter, the world of BT's 'Metaversal.' Whereas, BT's previous studio album release, The Lost Art Of Longing," continued down the beloved electronic music artist's path of perfectly melding together dance music with elements of pop, 'Metaversal' steers us in a decidedly different but welcomed direction. As BT put's it, "Metaversal is more of an experience than an album." A contrast between gentle and comforting soundscapes and dark and brooding bangers, 'Metaversal' ultimately reveals itself as an album prime for home listening. 'Metaversal' kicks off with the driving neon glitz of 'Kintsugi,' a track that is inspired by a metaphor for embracing your flaws and imperfections. It segues to the funk and early Hip-Hop inspired "Confunktion" and "Laurel Canyon Night Drive," the latter of which transports into a sci-Fi world that's "Tron" meets "Escape From LA." Next, "Stratosphere" offers an uplifting nod to the prog house fans while "Paper Chairs" raids the breakbeat vaults for some definitive BT chops. "The Blue Hour" is sublime electro chill best experienced when the sun dips below the horizon and the remaining sunlight takes on a mostly blue shade. Yes, you guessed it, this is an occurrence referred to as the blue hour.