Are you watching it? Or is it watching you? 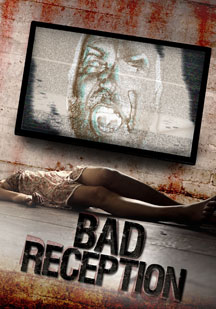 Heading for a new life in the big city, writer Ben Anderson (Randy Brown), thinks his luck has changed when he finds a new TV by the side of a desert road. At a house-warming party in his new apartment, Ben finds out the TV doesn't seem to work, much to the amusement of his friends. And then it begins... In the dead of night, the TV begins to work, showing images of a fanatical priest (Michael Sorich) hell-bent on redeeming the souls of "Sinners". Everyone who appears before the TV is to be judged. Commit a sin-and be punished. Nowhere is safe from the TV's wrath. Pride, Lust, Anger, Envy, Greed, Gluttony and Sloth are now truly the seven Deadly sins.

Writer/director Mark A. Todd is an accomplished television and film puppeteer, with two Muppet movies amongst his credits. He has also created a British series for BBC, an award-winning short film, and dozens of web videos for corporations across Europe and America, so he is no stranger to filmmaking . Todd is an excellent technician, and this is immediately apparent from the opening shots of Bad Reception. He uses long, sweeping shots of the California desert as well as in Los Angeles to establish Ben's travels. They are beautifully filmed shots and one must wonder how these were accomplished with a tiny budget of just $25,000 (although IMDb estimates $150,000, much more realistic but still a small budget for such expensive and expansive shots). Regardless of the actual budget, Roger Corman himself would be proud of the quality of this film, made for such a small amount of money!