Old-style horror blends with forbidden love in this period thriller. 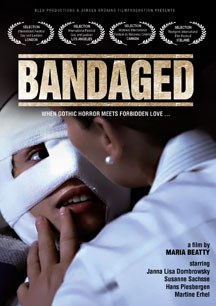 Old-style horror blends with forbidden love in this period thriller. Lucille lives with her domineering father and great aunt in a creepy mansion out in the middle of nowhere. She's about to turn eighteen and longs to go to college to study poetry, but her surgeon father insists the sciences are the way to go. Feeling as though she has no way out Lucille attempts suicide after rifling in her father's lab. She survives, but is left with hideous burns to her face, which her father chooses to treat at home. He hires a sultry nurse with her own chequered past to look after Lucille. Spending 24 hours together every day leads patient and nurse to discover passionate feelings for each other, the bandages come off and soon a torrid affair begins. Executive produced by Abel Ferrara.

—Lauren Wissot, The House Next Door