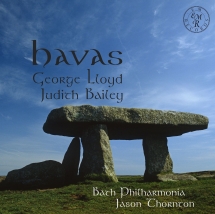 This disc features the World Première recordings of orchestral works by the Cornish composers George Lloyd and Judith Bailey in committed and vibrant performances by the Bath Philharmonia conducted by Jason Thornton. In a varied programme, Bailey's 'Havas' (an old Cornish word meaning summertime) evokes Cornish landscapes; whilst Lloyd's 'Le Pont du Gard' depicts the famous Roman aqueduct in France. The disc also includes Lloyd's 'In Memoriam' and the Prelude to Act II of 'The Serf', Bailey's Concerto for Orchestra, and is rounded off by the 'HMS Trinidad' March, the orchestral version of which received its première at theLlast Night of the Proms in 2013.