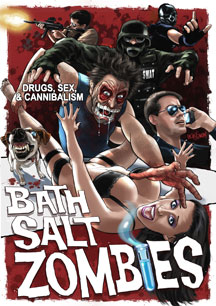 The bath salts epidemic facing the southern and mid-western US has been stifled by an unprecedented government crackdown. Head shops have been raided and shut down, component imports from the UK, India and China have been completely stopped, and aggressive penalties for users have been instated. This has led to a tremendous amount of surplus stock hidden by black market dealers, and a migration of those dealers (and in turn, users) to the northeast and other areas. In New York City, potent strands have surfaced and have attracted the most devoted bath salt junkies. In an attempt to outsell said strands, a young aspiring chemist has developed and even stronger batch... but something has gone horribly wrong. The new ultra potent bath salt batch has revealed a major side effect... It turns users into violent flesh seeking "zombies." When the zombies are high on balt salts, they are completely unaware of their actions and the seem to float in and out of consciousness. So when they kill / eat people, they are unaware of what happened when they come down off the drug. The drug is also more addictive than other forms, and users feel the need to stay constantly high due to the fact they become incredibly feeble when sober. They come down HARD.

Bath Salt Zombies is simply a creative and chaotic caper from a pretty prolific artist coming into his own.

Bath Salt Zombies is like a B-movie from hell, but one that somehow comes across as funny and watchable

This tasteless, ultraviolent black indie comedy is a demented joy for fans of low-rent rotter movies.

Brilliant movie, I loved it... If you only see one face eating drug fiend film this year, make it Bath Salt Zombies!