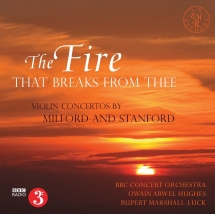 The Violin Concerto by Robin Milford was composed in 1937 and received two radio broadcasts – but was laid aside and forgotten following the early death of its composer. Possibly it was a victim of the trend then prevalent towards the programming of fiercely avant-garde compositions, both in concert halls and on the BBC, but its strongly melodic basis, its heady lyricism, and its passionate declamations make it a work undeserving of its neglect. Cast in three movements, it has much originality of structure: it opens with an extended, songful passage for the solo instrument, which is the subject for later development; however, a brilliant, dance-like episode follows, in which virtuosic double-stopping and cascading arpeggios in the violin are complemented by vigorous statements from the orchestra. The central movement, full of passion, soaring melodies and rich textures, and in which the influence of Elgar is very evident, leads without a pause into the boundless energy of the finale, in which the solo instrument leaps exuberantly, cajoles persuasively, and dances delicately, before the material of the whole concerto is summed up by the orchestra in a glorious apotheosis. The sombre, shadowed coda that brings the work to a thought-provoking close seems to have autobiographical overtones, perhaps being indicative of the dark depression that affected Milford throughout his life. Although more evidently rooted in the Austro-Germanic tradition of Bruch and Brahms, the Violin Concerto no.2 of Charles Villiers Stanford is no less a fascinating work. Composed in 1918, yet left only in a short-score form upon the composer's death in 1924, it was finally completed in 2011 by the noted Stanford scholar Jeremy Dibble, who used his expert knowledge of Stanford's compositional methods to realise the orchestration and thus to make the work performable in its intended context. The Concerto is especially memorable for the warmly glowing second movement, which seems to recall an Irish folk melody, whilst the inspired dialogue between solo violin and clarinet that characterises the central section provides a movingly effective complement.