IN A TIME OF GREAT CONFLICT SHE BECAME HER OWN WARRIOR. 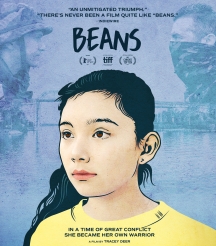 Twelve-year-old Beans is on the edge. Torn between innocent childhood and delinquent adolescence, she is forced to grow up fast to become the tough Mohawk warrior that she needs to be during the Indigenous uprising known as The Oka Crisis, which tore Quebec and Canada apart for 78 tense days in the summer of 1990.

'Beans' is a thoughtful, stirring reflection by someone who survived it all, quietly demanding acknowledgement not just of her land, but of her life.

When Beans works, it resonates. And when it doesn't, it's not a tragedy - merely evidence of a filmmaker finding what works for her voice and vision, and what might work better for a highly anticipated follow-up.