With Acrobat's catalogue having grown substantially, and its product strategy evolved significantly over the years 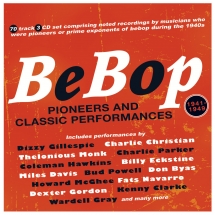 With Acrobat's catalogue having grown substantially, and its product strategy evolved significantly over the years, we are occasionally looking to repurpose some of our early albums in the context of the product formats that are now more widely used in our releases. This 70-track 3-CD set comprises the complete contents, plus some added titles, of three products released in our ACRCD range more than fifteen years ago, and which offered the opportunity to assemble a nicely coherent, substantial and enhanced 3-CD product at a lower price than the three single CDs combined. Those products were ACRCD 117, 118 & 119 "Bebop Vols. 1, 2 & 3". The titles on those three CDs have now been re-compiled in chronological order, with duplicated titles removed and twelve new titles added, along with a substantial booklet. The collection comprises recordings which are seen as significant performances in the genesis and development of bebop as a genre, or regarded as important or notable examples of bebop. They tracks have also been selected so that a significant proportion of the artists regarded as pioneers, innovators or noted exponents of bebop are represented in the collection. On that basis, it features a host of great names not only in bebop but in the wider world of jazz, and the collection offers a highly entertaining an insightful trawl across a dynamic jazz decade.