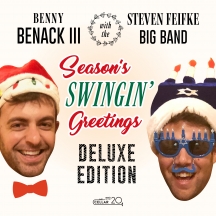 Season's Swinging Greetings: Deluxe Edition" is the culmination of a 3-year long holiday vision between arranger/pianist Steven Feifke and trumpeter/vocalist Benny Benack III. Recorded both in-person and utilizing remote recording during the pandemic, the deluxe edition includes a stellar string section on a number of tracks, as well as brand new holiday classic original material, plus familiar favorites in big band form. A bonus quartet track is included featuring a spirited romp through "Sleigh Ride". Mixed and mastered by Dave Darlington at Bass Hit Studios in NYC, the full-length album features 10 tracks in total, including two singles (Sleigh Ride & Maoz Tsur). The personnel is a veritable who's-who of New York's finest musicians, including solo contributions from rising star reedist Alexa Tarentino, a vocal duet ft. Alita Moses, and even a special guest appearance by vibraphone master Warren Wolf, among others. The repertoire is a mix between original material penned by both Benack and Feifke, as well as an emphasis on re-energizing familiar holiday fare.

There's an attractive mixture of sincerity and humor to be found in the way this crew addresses the holidays, but don't let the lightheartedness fool you: The musicianship is serious, and seriously on point.

—Dan Bilawsky, All About Jazz