A fascinating journey through United States in which the lines between fact and fiction are blurred. 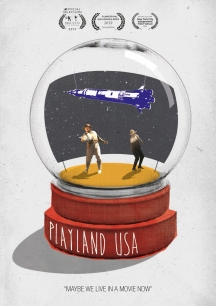 A poetic time travel fantasy through the imagined history of the United States as a modern fairyland, along the traces of our desire for illusion and escapism – fatally bound between fact and ﬁction, anticipating the current reality shifts in the US. PLAYLAND USA questions the possibilities and limits of the representation of history and is a self-reﬂection regarding ﬁlm as a medium. The ﬁlm asks essential questions: What is seeing? How do we see the world? And: What is invisible, for us, for others? The ﬁlm draws a line in cinematic images from Noah’s Ark to the colonization of Mars, including dinosaurs, Hollywood-Indians, and superheroes, of course. It becomes increasingly clear that Benjamin Schindler has made many American Dreams into an American Nightmare, inscribing quotes of pop culture and Hollywood into a biblical history. When the ﬁlm recounts the shooting at the Batman premiere in Aurora, reality and ﬁction have ﬁnally merged.