Beverley Martyn - The Phoenix & The Turtle 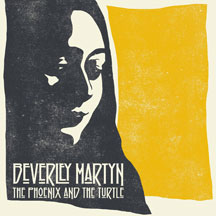 The Phoenix and the Turtle the new album by legendary singer Beverley Martyn. Described by Beverley as a very personal album, it features songs written throughout her entire career, from her very first song, "Sweet Joy", to the previously unrecorded Nick Drake & Beverley Martyn song "Reckless Jane" which was started in 1974 when Drake lived nearby Beverley in Hampstead. "We started writing the song as a bit of a joke," she says, "When John and I lived in Hampstead, Nick lived one stop down the tube line, and he would come around and babysit sometimes. I couldn't look at it for a long time after he died, but then finally I decided to finish it." "When The Levee Breaks" and "Going To Germany" are songs Beverley used to sing with The Levee Breakers. Another song, "Women And Malt Whiskey" is, in part, about John Martyn and other friends from the scene back then. The Phoenix and the Turtle is Beverley's first album in fourteen years and was recorded in Wales with guitarist and producer Mark Pavey; it also features contributions from bass player Matt Malley, ex-Counting Crows and drummer Victor Bisetti, ex-Los Lobos which were recorded "by the magic of computer" in California. The album "still has that in-a-room feel," said Beverley recently, "it sounds like an old style analogue record. It's very me, very transatlantic."

...a warm engaging record. A fitting capture of an illustrious career. 4 stars

A successful comeback, at last, for one of the celebrities of the 1960s folk scene.

The nine songs here have been carefully selected from throughout her career and make the ideal showcase for her talents as a musician and a writer, and it's a tribute to the combined skills and empathy of Beverley and guitarist and producer Mark Pavey that they've been able to mesh a wide-ranging collection of material into a cohesive whole.