A much anticipated date led by one of jazz's most prolific drummers. Freedom Of Ideas is a snapshot of Billy Drummond's musical vision. 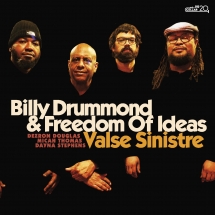 From the liner notes:

The music presented here is a snapshot of my musical vision. Where I am today, where I've been, and where I might be headed. I've been leading various aggregations of "Freedom of Ideas" for well over a decade and am grateful to have the opportunity to document this vision.

The music is from the compositional pen of a variety of sources. People whom I've admired and some whom I've had personal and musical relationships with. I would like to mention a couple of them in particular.

"Little Melonae" was written by Jackie McLean and arranged by Dezron Douglas (The Voice of Reason). Dezron is a disciple of Mr. McLean and for me McLean is the epitome of a purity in music that represents freedom in the true sense of the word. I have been a fan of his since my first memories of hearing music which was played by my father as a youngster. I played with Jackie on two occasions which was a dream come true. One of my treasures is an inscription from him to me on one of his recordings that reads, "To Billy, one of my favourite drummers of all time". That is something I'll cherish all my days!

The title track Valse Sinestre is written by the wonderfully unique composer Carla Bley. I fell in love with this piece while I was working with her. It was written for a project initiated by artist, surrealist painter and novelist Leonora Carrington. She wanted to collaborate with Carla on an Opera. Unfortunately, the Opera never came to be. The piece, however, remains and I think it's a gem. I was incredibly fortunate to play, record and tour with Carla in various ensembles over the years.

Tony Williams will be forever acknowledged as one of the greatest drummers who ever lived. He changed the way the instrument and music were played. He also developed into a wonderful composer, which is rarely mentioned. Our interpretation of his composition, "Lawra" is a gesture of my appreciation for his genius as a drummer and a composer. He was a GIANT!!!

Drummer/composer Billy Drummond returns with his first album as a leader since 1996. Valse Sinistre is a multigenerational project featuring some of the most innovative voices on the scene today and offering a dynamic repertoire, including rarely-heard pieces and a sole original composition intercutting John Coltrane's harmonic ideas with Thelonious Monk's melodic leaps and tendencies.

This is an album both delicious and satisfying, like a well-cooked meal with friends and family

On Valse Sinistre, Drummond's ride-cymbal beat is lively, varied and full of passing cross-rhythms -- the sound of a musician fully engaged and in the habit of attentive listening.

Valse Sinistre is so good that it almost feels irresponsible. Drummer Billy Drummond and his post bop quartet are not only firing on all cylinders, but venturing into such daredevilry that you want to shout, 'Are you guys insured?'

Drummond is, arguably, one of the most innovative drummers currently on the NYC scene

This is Drummond's first album as a leader since 1996, and it's great

Drummond carefully chose these selections and sequenced them in the way he wanted the album to flow, creating one of the more interesting recordings of the year with these brilliant musicians

The songs may come from various walks of jazz life, but in Drummond's capable hands, they all sing from the same soul