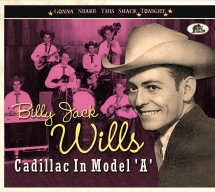 Another exciting title in Bear Family Records®' popular 'Gonna Shake This Shack' series.
Billy Jack Wills was the youngest brother in the Texas Wills Western Swing dynasty.
He wrote the lyrics to Faded Love, the huge 1950 hit for his big brother Bob!
At the time, Billy Jack was running the Wills Point club in Sacramento for his brother Bob and formed a house band - one of the hippest Western swing bands of the 1940s and early '50s - that accompanied him on these recordings.
Trademark: the hardest backbeat in country music at the time.
Jazzy rockin' versions of Good Rockin' Tonight, Crazy Man Crazy, All She Wants to Do Is Rock alongside (Western) Swing classics like Air Mail Special, C-Jam Blues and Cadillac in Model' A' - great Rhythm & Western in its purest form!
31 songs, described in detail in the extensive illustrated booklet with liner notes by Roland Heinrich Rumtreiber.

Here is yet another exciting title in Bear Family's popular series 'Gonna Shake This Shack'. Billy Jack Wills was the youngest brother of the Wills western swing dynasty. Born February 26, 1926, in Memphis, Hall County, TX, Billy Jack joined the family business as Johnnie Lee Wills' bass player in his late teens. However, mighty Bob Wills ordered him to California to join the Texas Playboys as bass player and drummer. He was also occasionally featured as a vocalist, and he proved his worth by writing the lyrics to Faded Love, Will's massive hit of 1950.

In the late 1940s, Billy Jack Wills took over management of Wills Point, Bob's club in Sacramento. While Bob and the Texas Playboys went on tour again, Billy Jack formed the house band that accompanied him on these recordings. Legendary Playboy Tiny Moore did not want to get back on the road with Bob and became the featured star and co-vocalist in Billy Jack's Western Swing Band.