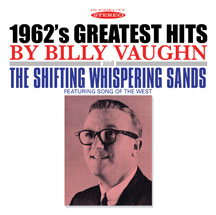 Two albums appearing for the first time on CD from Billy Vaughn, one of the most successful orchestra leaders of all time based on chart success - between 1955 and 1960 Vaughn placed 26 singles and 36 albums in the US charts. '1962's Greatest Hits' peaked at #17 and spent 32 weeks in the charts. 'The Shifting Whispering Sands' was originally a Top 5 single recorded in mono; Vaughn re-recorded the version here in stereo and the album was his tribute to the American West with the inclusion of songs such as "Cool Water", "Red River Valley", "Home on the Range" and his own musical saga "Songs of the West". The six bonus tracks are from Vaughn's other best-selling albums 'Look for a Star' and 'A Swingin' Safari'.