Known as "The Tall Texan", Billy Walker was a country singer who made his first records in 1949 and had his debut hit in 1954, 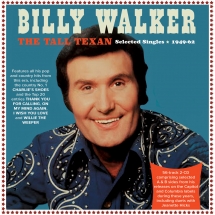 Known as "The Tall Texan", Billy Walker was a country singer who made his first records in 1949 and had his debut hit in 1954, going on to build a chart career that lasted over three decades, as he adapted his style to the changing country market. This collection addresses the first decade and more of that career, when he firmly established his reputation and became a member of the Grand Ole Opry, enjoying a career highlight with the No. 1 country hit "Charlie's Shoes" and the Top 5 hit "Willie The Weeper" in 1962. He was one of the first country artists to record a song by Willie Nelson. This great-value 56-track 2-CD comprises selected A and B sides from his releases on the Capitol and Columbia labels during these years, including duets with Jeanette Hicks. It features all his pop and country hits from this era, including the country No. 1 "Charlie's Shoes", the No. 5 "Willie The Weeper" and the Top 20 entries "Thank You For Calling", "On My Mind Again" and "I Wish You Love". The collection follows his progression through the country ranks as styles changed to the new Nashville sound, and he flirted with the rockabilly and rock 'n roll idioms along the way, and it's an enlightening and entertaining introduction to a country star whose music merits more attention than it has received over the years.