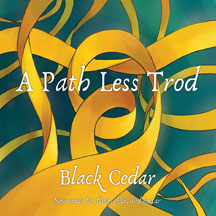 Black Cedar, a rare mix of wood flute, guitar, and cello. This compilation of contemporary and folk music includes Durwynne Hsieh's Miscellaneous Music, commissioned by Black Cedar in 2015. It's a collection of three contrasting pieces. The first - MÃ¶bius Movement - is named after the famous MÃ¶bius strip, a geometric construct that has only one surface. Introverted Interlude is a slow, musical portrait of an introvert. Five Fun Facts, is a collage that incorporates disparate elements for the sole purpose of having a good time, with rock and jazz rhythms, and a cello effect that imagines a turkey taking a ride down the front of the instrument. Is there a deeper meaning here? "Nah, just want to have fun," says Durwynne. Nathan Kolosko's Hungarian Trio (2012) is also on the program, and it infuses classical structures into traditional folk tunes with deeply mesmerizing guitar tones, foot stomps and hip sways, driving cello beats and guitar slaps, gypsy scales and ancient themes. Black Cedar's 2014 commission, Of Emblems by Garrett Shatzer is also in the album, and they round out the collection with Klaus Hinrich Stahmer's forgotten gem, Debussyana (1983). "Stahmer's off-kilter approach to his source material suggested that this music had less to do with the faun and more with the nymph who had just spent the afternoon with him. We need more wit like this in the chamber music repertoire." (San Francisco Examiner) Black Cedar unique sonority of wood flute, guitar, and cello has earned praise throughout Northern California. "Black Cedar has done a wonderful job of making the case that chamber music can involve approaches to instrumentation not usually expected." (San Francisco Examiner) And with nearly fifty appearances in their brief three-year existence, the trio has won awards and invites from the San Francisco Friends of Chamber Music, the Zellerbach Family Foundation, and the National Flute Association. "Hats off to them!" writes the Santa Cruz Sentinel.