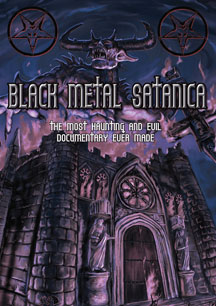 BLACK METAL SATANICA is an in-depth documentary capturing the dark, mystical and evil history of the Black Metal genre. Based on Scandinavian Viking lore, Black Metal borrows from ancient Viking melodies, lyrics and mythology dating back to the 11th century. The new wave of Black Metal heroes give their take on the current state of the genre as well as on the founding fathers of Black Metal like MAYHEM, BATHORY and IMMORTAL and the extreme, almost inhuman acts that surround this controversial subculture. Self-mutilation, murder, suicide, church-burning, the desecration of graves and corpses are all covered here in shocking and graphic detail! Features music by WATAIN, VREID, SHINING, SVARTAHRID, RIMSFROST, MORDICHRIST, ONDSKAPT, and more.