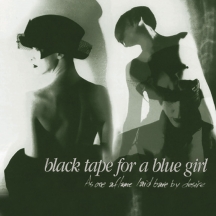 Whether this music is “gothic,” “ethereal,” or “ambient” is in the eyes of the beholder. The truth is that Blacktape creates incredibly passionate music incorporating all these genres, yet transcending them with striking musical poignancy and lyrical insight.

Ambient Trance “As one aflame laid bare by desire proves that melancholy waters run deep. Perhaps not as gloomy, and certainly not as maudlin and angry, as some previous releases, angst as art is still the source of fuel for Rosenthal and crew’s perpetual dark flame. In fact, the art aspect is intensified as Sam laces threads from dadaist Marcel Duchamp’s artworks and literature into Black tape’s gauzy fabric. Think modern Gothic chamber music with some ambient/electronic overtones.”

Magnet Magazine ““A lot of As One Aflame is damn near brilliant in its artistic reach and dramatic scope. With otherworldly electronics, lone violin and weeping flute all draped around the solemn whispers of Rosenthal (and the evocative voices of Julianna Towns and Oscar Herrera), black tape provides a most ghostly encounter. At times, Blacktape echoes the romantic indulgence of This Mortal Coil, with haunting female vocals and ornate neoclassicism juxtaposed against an ominous, frozen landscape of strings and keyboards; Rosenthal’s art achieves both an eerie sonic calm and an intense degree of emotional extravagance. As One Aflame can’t be dismissed as a misguided attempt to invigorate the well-preserved corpse of the darkwave. This stuff is quite guided and very much alive.”