Existential, ethereal, and gothic musings with angst and trepidation yet also beauty and hopeful melancholia. 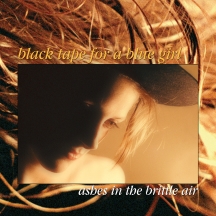 Black Tape For A Blue Girl’s third album (1989) in a deluxe 2CD edition remastered from the original 1/4” tapes. It’s an album of existential, ethereal, and gothic musings with angst and trepidation in the lyrics yet also beauty and hopeful melancholia in the mood and music. The remastered sound is warm and clear, while retaining that dreamy, romantic quality from the 80s.

Alternative Press: “This is hurting, romantic lament. Herrera’s vocals ram me with image-brimming, griping vacancy of the precariously desperate soul hanging beneath hope by a frayed thread.”

Ashes brought the band out of the fanzine-based underground to listeners of 80s ‘college radio.’ “Across a thousand blades” on CMJ’s Certain Damage compilation went to stations across the country and garnered regular airplay.

Bursting forth like a lucid dream, this release unearths powerful connections to deeper truths. A diverse collection of songs that arrived at just the right moment — There wasn’t anyone else in America doing this ethereal style. Oscar sizzles with dramatic and passionate vocals. Sue-Kenny Smith’s voice brings a softer, sensitive & spontaneous English-folk quality to the album.

Disc 1 contains the remastered 11-track 1989 album. Disc 2 contains a total of 21 bonus tracks including hit “Across a thousand blades” with a new 2020 mix using only original sources. Also included are six songs never heard before: tracks from “the first version” of Ashes, the long lost The Sound of Waves ep.

L.A. Weekly: “Black Tape for A Blue Girl do a reasonable approximation of the 4AD vibe around the corner in Garden Grove. This is languid, lucid music… Their entropy is infectious.”