Black tape for a blue girl pushes the boundaries, exploring new sounds and moods within the Darkwave genre. 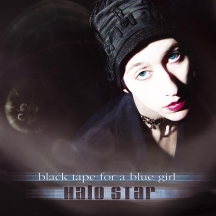 Black tape for a blue girl’s 2004 9th album is at once a departure and a return. These twelve darkwave tracks (including the fan favorite “Knock Three Times”) take a melodic route while the rhythm hammers in dangerous nails. Songwriter/lyricist Sam Rosenthal meshes driving, male goth vocal-stylings with heavenly female voices and forceful percussion and acoustic guitar to create an involving album both rhythmic and lyrically engaging. In this, one of America’s originators in the darkwave genre returns to its origins with an album sure to please fans old and new alike.

All Music After releasing two heavy, Duchamp inspired albums, Black Tape for a Blue Girl returns with Halo Star, a countryside, pastoral type of darkness in twelve purposeful tracks... Bret Helm from Audra does an excellent job on vocals throughout – “The Gravediggers” being his big showcase – as does Elysabeth Grant who’s breathy but pitch perfect. This new playful Black Tape for a Blue Girl should be extra thrilling for longtime fans, but being so varied and well structured, Halo Star ends up an excellent way to win over newcomers.

San Francisco Weekly “Out of the Shadows | If you do exceptionally large loads of darks at the laundromat, have a case full of Bauhaus and London After Midnight CDs, and generally hold an affinity for all that is gloomy, it’s no news to you that Black Tape for a Blue Girl is back again. The doleful sound that set the mold for various artists on the darkwave label Projekt Records in the ’80s (founded by Black Tape composer/keyboardist Sam Rosenthal) is still built around keening keyboards, mournful lyrics about doomed love, and ethereal vocals from Elysabeth Grant and Bret Helm. But thanks to the band’s new affection for acoustic guitar and orchestral instrumentation, what could have sounded irredeemably past-it is fresh enough for a new generation of fans.”