Black Tape For A Blue Girl - The Rope 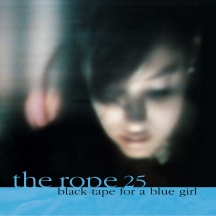 In 1986, Black Tape For A Blue Girl’s darkly mesmerizing debut The Rope appeared on the underground rock scene. It kicked off a rich and diverse musical career for Projekt founder/Blacktape songwriter Sam Rosenthal. 25 years later, Projekt celebrates this momentous anniversary with The Rope 25, a 2CD set including The Rope re-mastered and a bonus disc of current Projekt artists’ reinterpretations of the material. Rosenthal’s electronics coupled with his angst-filled, introspective lyrics established Black Tape For A Blue Girl’s position beyond the traditional “gothic” sound. His lyrics overflow with the emptiness of a shattered soul and broken heart revealing a dark, tortured man scanning the wreckage in search of love, understanding, and connection. The timeless blend of Oscar Herrera’s passionate vocals intertwining with warm electronic soundscapes and soothing ambient passages creates an album similar to 80’s-era releases on 4AD and Factory Records.

Opening the album is the rhythmic, hard-hitting “Memory Uncaring Friend,” along the lines of Peter Murphy or Gang of Four. Following this striking opener, the music takes a more subtle turn: gently disorienting, autumnal, mesmerizing, mournful, full of wonder and elusive grandeur. Upon The Rope‘s release, comparisons were made to Cocteau Twins, Brian Eno, Phillip Glass and Chris & Cosey.

Star Hits magazine wrote, “Black Tape For A Blue Girl’s The Rope is like the musical equivalent of a nervous breakdown. Complete with dark, scary lyrics that make The Smiths sound like Alvin and the Chipmunks, this might give you an idea of what mental anguish sounds like. It is an experiment worth hearing.”