Black Tape For A Blue Girl - These Fleeting Moments

Gently lit by the existential gleam of a dying sun. A darkwave, ethereal sound. 2LP on 150 gram green-swirled vinyl. 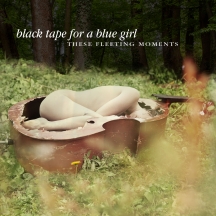 Soundscape Magazine: “Gently lit by the existential gleam of a dying sun.”

Given where Black Tape for a Blue Girl began over a quarter of a century ago with founder Sam Rosenthal’s exploration of brooding, extended electronics and strings meshed with deeply revealing lyrics and darkly textured, melodramatic vocal performances, it’s striking to see his muse and inspiration reach a new peak on their 11th album. The ethereal, gothic and darkAmbient stylings that made them one of the originators of American darkwave are offered on this release which coincides with the band’s 30th anniversary. Rosenthal reinvigorates their classic sound with the return of original vocalist Oscar Herrera, absent from music for 17 years.

Blurt Online: “A clever move and a tricky balancing act, the (new) record digs deep into the band’s traditional sound, while still incorporating more recent developments and experimenting with new ones. Earnest, resourceful and demanding, it easily stands as one of their best albums.”

New Noise Magazine: “It’s the kind of record that you play after the day’s activities have more or less concluded, and is recommended for a time of contemplative reflection.”