Terror Has No Limits 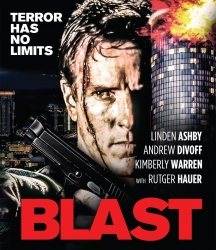 The world's finest athletes have once again gathered for the summer games. Security is airtight as world leaders set aside global conflicts in order to celebrate the purity of sports.

Just before the competition begins, a deadly team of terrorists mounts a precision attack on the swimming complex, holds the Womens' swimming team hostage and unknowingly traps a janitor (Linden Ashby, Resident Evil: Extinction), within the sprawling compound. The terrorists wire each competition venue with deadly fission explosives and the uplink to a global satellite to announce their plans to a stunned international audience.

Totally unprepared for an assault of this magnitude, a desperate President and the F.B.I. enlists the brilliant Interpol counter-terrorism expert "Leo" (Rutger Hauer), who coordinates his efforts with the trapped janitor to contain this volatile situation.

So here we have 'Die Hard' in an Olympic stadium, well its actually based around what could of happened if the Atlanta Olympics (1996) had come under siege from the terrorist attack which the FBI actually stopped in reality. So an actual interesting concept from Mr Pyun this time.