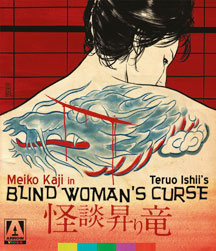 A thrilling Yakuza film featuring eye-popping visuals, sensational fight sequences and the gorgeous Meiko Kaji (Lady Snowblood, Stray Cat Rock), in her first major role. Akemi (Kaji) is a dragon tattooed leader of the Tachibana Yakuza clan. In a duel with a rival gang Akemi slashes the eyes of an opponent and a black cat appears, to lap the blood from the gushing wound. The cat along with the eye-victim go on to pursue Akemi's gang in revenge, leaving a trail of dead Yakuza girls, their dragon tattoos skinned from their bodies. A bizarre blend of the female Yakuza film and traditional Japanese ghost story, with a strong dash of grotesque-erotica (the same movement was a sensibility of Edogawa Rampo whose works were adapted by Ishii in Horrors of Malformed Men), Blind Woman's Curse is a delirious mash-up of classic genre tropes, of which Ishii was no stranger, having directed everything from Super Giant films to Biker movies!

This bewildering, reckless, and captivating Japanese monstrosity is a colorful, widescreen explosion of cross-genre craziness.

The Arrow Video release is absolutely stunning, the colors popping off the screen, every paused still looking like a piece of art.

Arrow does a terrific job highlighting the artistic style that is dripping from Blind Woman's Curse... It's awesome fun!

One of the best examples of Pinky Horror