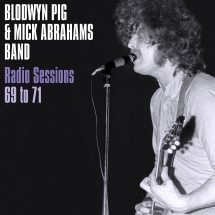 This album features previously only available on CD, early radio sessions from 1969 to 1971. This is the classic period for Blodwyn Pig and sees them firing on all cylinders; reaching the UK Top 10 with each album release. Also featured on the album is the Mick Abrahams' Band This band offers a more mainstream taste to popular music of the time of recording, eclectically mixing blues, folk, jazz and rock into a spellbinding experience. Released on BLUE vinyl