A Fashion House of Glamorous Models... Becomes a Terror House of BLOOD! 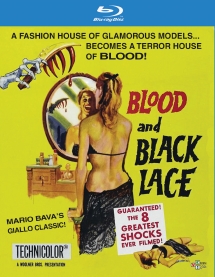 Director Mario Bava's Giallo Masterpiece! An unscrupulous business operating under the guise of a top fashion house with exotic models running sexual favors, cocaine dealings and blackmail, becomes a murder scene--after someone is pushed to the edge. The saga begins when a beautiful model is brutally murdered, and her boyfriend, a known addict supplying her drugs, is suspected of the crime...but is he guilty or is someone waiting in the shadows setting him up?

5-Stars! Clear and bright, Bava's 'Giallo' proves that suspense could be shot in vivid Technicolor, and thanks to this disc, you can now see why.

Blood and Black Lace is an essential experience for Euro horror fans, especially for those whose giallo viewing history has yet to branch beyond Argento and Fulci. Bava's Techicolor magic needs to be seen to be believed, and short of catching it on the big screen there's no better way to watch the film than in the sharp, eye-popping HD restoration we see here.

Made for roughly $150,000, BLOOD AND BLACK LACE was an Italian/German co-production, and the German co-producers probably wanted Bava to deliver an Edgar Wallace-style thriller, which were very popular at the time. Instead, Bava delivers a far superior fi

Since the movie is devoid of most other content, theme or message, it remains one of those pictures that live by style alone. But what a style! The French Mini-minuit Fantastique articles (some of the only contemporary writing which even began to take the