During a local fishing contest, people are being violently dragged into the lake and killed by a giant fish hook. 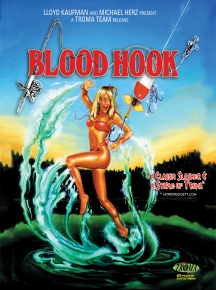 It's time for the annual "Muskie Madness'' fishing contest, and the lake is packed with hopeful fishermen. It soon becomes apparent, however, that a psychotic serial killer has also decided to join the festivities. Although the police have determined that the killer is claiming his victims by landing them with giant fish hooks, no clear suspects can be found since everyone is using the exact same hook! What is the killer's goal? And more importantly, can the murders be stopped?

Fans of slasher film should definitely see this, though, simply to laugh at some of the ways the genre gets subverted - and the ways it doesn't... This weird and wacky slasher smells fishy, but it's also just one of those films that has to be reeled in once.