When the crew of a photoshoot breaks into a castle, they unleash the madness of the owner who is possessed by the spirit of a 16th century torturer. 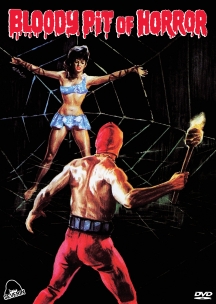 The most insane post-peplum psycho-sexual classic in Italian horror history just got even better: When the crew of a saucy photoshoot breaks into an abandoned castle, they will unleash the madness of the male-body-obsessed owner (muscleman Mickey Hargitay in the WTF? performance of his career) who is possessed by the vengeful spirit of a 16th century torturer. Walter Brandt (THE PLAYGIRLS AND THE VAMPIRE) and Femi Benussi (HATCHET FOR THE HONEYMOON) co-star in this hair-raising orgy of sadism - also known as THE CRIMSON EXECUTIONER - from director Massimo Pupillo (TERROR-CREATURES FROM THE GRAVE) and the screenwriters of KILL, BABY... KILL! with special effects by future Oscar® winner Carlo Rambaldi (E.T.), now scanned in eye-stabbingly stunning 2K from the original uncut negative recently discovered in a Rome lab vault.

The beloved classick from the golden age of Italian horror... A breathtaking blend of cheesecake, pop art and Sadian excess.

★★★★ One of those movies that will have you staring into your glass looking for the residue of an acid blotter.