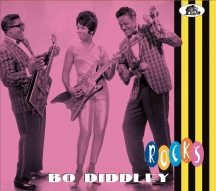 -28 original Bo Diddley Checker recordings from Chicago. -One of the most important discs in Bear Family Records'® Rocks series. -Including 3 Top 5 R&B hits: Bo Diddley from 1955, Pretty Thing from 1956, and Say Man from 1959. -Also including highly influential tracks such as I'm A Man and Diddley Daddy from 1955, Road Runner from 1960, and You Can't Judge A Book By The Cover from 1962. -Recordings feature several important and original musicians, including: Jerome Green on maracas, Clifton James on drums, Jody Williams on guitar, and Peggy Jones (Lady Bo) on guitar, along with renowned blues players Otis Spann, Lafayette Leake, Frank Kirkland, and Willie Dixon. -Formidable and informative biographical notes by Bill Dahl. -Full discographical information for each track. -Incredible photo gallery including previously unseen shots. -Reissue co-ordinated and compiled by Martin Hawkins. You can't judge a book by the cover, according to the song by Bo Diddley - but you sure can tell a record made by Bo Diddley. For that reason, this is one of the most important discs in our Rocks series. Here is a full CD of truly original, groundbreaking rock and roll, presented as only Bo Diddley could, and as only Bear Family Records® can. Bo Diddley's music had a unique beat, an individuality, an 'attitude,' and it formed part of the basic fabric of rock and roll during its heyday in the mid-1950s to the early '60s. There was normally a Bo Diddley disc on the American R&B charts in those years (11 in all) and 5 of them made the pop charts, too. The immediately recognizable 'Bo Diddley Beat' was copied by some, but never as well, while many others weaved elements of his style into the rock music mainstream. From Buddy Holly's Not Fade Away, Dee Clark's Hey Little Girl, and Johnny Otis' Willie And The Hand Jive through Freddy Cannon's Buzz Buzz A-Diddle-It, Mac 'Dr. John' Rebennack's Storm Warning, to Magic Bus by The Who, Diddley's sound has become universal.