A nostalgic salute to stars who brought music and laughter to the troops in WWII, featuring Bob Hope and many others. 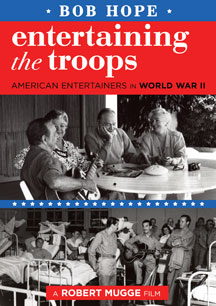 World War II affected everyone, and everyone found his or her own way of helping the cause. For American entertainers, choices included enlisting, selling war bonds, visiting the wounded, and entertaining the troops. In this 90-minute documentary, filmmaker Robert Mugge pays tribute to hundreds of well-known (and not so well-known) performers who assisted the military both at home and abroad. Included are rare period performances by the likes of Bob Hope, Bing Crosby, Jack Benny, Dorothy Lamour, Frances Langford, the Andrews Sisters, Abbott and Costello, Lena Horne, Carole Landis, Dinah Shore, Jerry Colonna, Danny Kaye, Eddie "Rochester" Anderson, Larry Adler, Kay Kaiser, Cass Daley, Irving Berlin, Bugs Bunny, and many others, as well as special appearances by such prominent actors as Humphrey Bogart, James Cagney, Marlene Dietrich, Carole Lombard (in the last appearance before her untimely death), and Edward G. Robinson. Rounding out this tribute are 1988 interviews with Dorothy Lamour ("the Bond Bombshell"), Frances Langford ("the G.I. Sweetheart"), Mel Blanc (the voice of World War II's Private Snafu, alias the Sad Sack), and Maxene Andrews of the Andrews Sisters, as well as a reunion of Bob Hope's World War II troupe of performers (videotaped just three days before Hope's 85th birthday). "Entertaining the Troops scores not only as vividly told history, but also as entertainment unto itself...as technically proficient as a good feature film. Saving the best for last, Mugge presents in the last half hour a...reunion of Bob Hope, Frances Langford, dancer Patty Thomas and musician Tony Romano who (with Colonna) formed the core of Hope's legendary touring troupe... It's a stirring look at Hope in his heyday, and a reminder that he [was] the consummate entertainer. The men in the trenches in World War II knew that, and this [film] will help ensure that the rest of us will never forget." - Andy Wickstrom, Philadelphia Inquirer

'Entertaining the Troops' scores not only as vividly told history, but also as entertainment unto itself... as technically proficient as a good feature film.

Featuring classic footage of America's best-loved performers, this film is a wonderful look at the various roles our entertainers played during the war. Recommended.

You may have seen a few seconds here and there of Hollywood stars doing their bit for servicemen during the war in other nostalgia documentaries, but not in the kind of in-depth performances that Mugge has assembled.

War may be hell but this is heaven. Irresistible. Glorious.