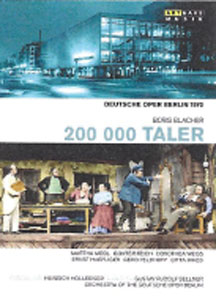 Boris Blacher was one of the most important and most widely performed composers in post-war Germany. In his 1969 opera “200 000 Taler” (200 000 Thalers) he adapted a comedy by famed and popular Jewish author Scholom Aleichem and created a sophisticated milieu study around tailor Schimele Soroker and his family who come to great fortune by winning the lottery.This 1970 recording of the world premiere production stars a stunning Martha Mödl as Soroker’s wife and Günter Reich in the role of the shrewd tailor. Director Gustav Rudolf Sellner leads his fine cast meticulously through the comic and self-ironic material and supports the cliché-less score that Blacher conceived for Aleichem’s characters. Heinrich Hollreiser conducts the Orchestra of the Deutsche Oper Berlin with insight and musical mastery. As the Neue Zürcher Zeitung wrote after the premiere, “Blacher discovers forces and notions that move our century within the naive, unpretentious literary material at hand. … Without ever using Jewish melodies this score creates a kind of folklore of a setting that is fully Blacher’s own. Here lives a new style.”