NOMINATED FOR A 2020 ''JUNO'' AWARD in the Jazz Album of the Year: Group category! 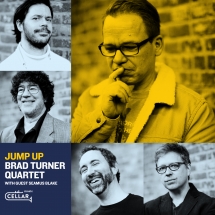 Turner and Blake reunite nearly 20 years later and the results are breathtaking.

Sometimes trying to recreate something can be unsuccessful, and the results can be disappointing. But it's no surprise that Jump Up is a huge success. The album features all original compositions by Brad and he penned some beauties. There is a palpable excitement and electricity in these tracks, clearly demonstrating that Seamus and Brad are both relishing sharing the front line again.

Jump Up--culled mostly from a single studio session at the close of a snowy, three-day stint at a Vancouver club--finds trumpeter Brad Turner making the most of a small window of time, unloosing nine original hardbop-leaning tunes with swinging urgency alongside tenorist Seamus Blake. While the gig was only a weekend and the session a single day, there's no shortage of familiarity among the five musicians here. Blake ignites the band, the two horns sparring at every turn. Turner, whether on trumpet or flugelhorn, is a confident composer, employing inspired harmonies with Blake's bellowing tenor leading the up-tempo material. The titular ''Jump Up'' is a burner with drummer Dylan Van Der Schyff summoning a waterfall of cymbals, while pianist Bruno Hubert patiently hammers a thick progression. He switches to Rhodes for the simmering ''Likes'' and pushes the band into looser territory for ''Superlux,'' a modal hot-pot of soaring soul. Bassist André Lachance kicks off the 11-minute ''Catastrophizer'' as Turner dribbles out woozy lines amid Blake's fiery testimony. The rhythm section is a chaotic swell beneath the two horns, its manic energy hinting at the artistry unfurled during the troupe's live engagement.