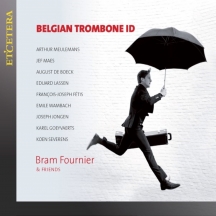 This recording is the result of a research project into Belgian music for trombone carried out at the Royal Conservatory of Antwerp (AP Hogeschool). Bram Fournier chose a varied selection of works from the wealth of repertoire available; the works cover a period of almost one hundred and fifty years of Belgian trombone music, from François-Joseph Fétis, the pioneer of Belgian musical life, to the contemporary composer Koen Severens.

All of these works, with the exception of Joseph Jongen's Aria et polonaise, are recorded on CD here for the first time. Emile Wambach's Concert aria has, however, been recorded by Glenn Van Looy on euphonium; Eduard Lassens' Fantasiestücke have been recorded with piano accompaniment by John Rojak, whilst Blair Bollinger has recorded them in a version with full orchestra.