Organ player Brian Chartette delivers a super swinging quartet session with memorable tunes that are inspired by Charette's hero's of the Hammond B3. 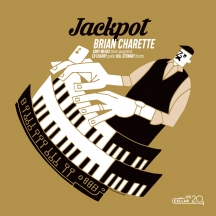 From the liner notes, written by the artist:

I've known Cory Weeds for many years and have always admired him as an artist and label owner. Last year, I had the idea for a new recording that would be more traditional than my other albums which often placed the organ in a more unconventional role with electronics and wind ensembles. I wanted to write some pretty, swinging, bebop tunes with a classic approach that would give a nod to all my biggest influences; Jack McDuff, Melvin Rhyne, Don Patterson, Larry Young, and Jimmy Smith. Cellar Music's esthetic seemed like a perfect fit for the concept, as did Cory's musicianship which is evidenced in the tracks here. Ed Cherry on guitar was an obvious choice. He's lyrical, funky, and a brilliant accompanist. We've also worked together for many years and know each other's style very well. Cory had worked with Bill Stewart before and suggested him as drummer for the group. I was naturally very excited to play with one of my heros. Bill's hard swinging and masterful control were perfect for the date. With Jackpot, we've tried to deliver a super swinging session with memorable tunes and super soulful blowing. I hope you enjoy.

He can groove with the best.... It's masculine without being masculinist and macho, and even in this day and age, that's a pretty good thing.