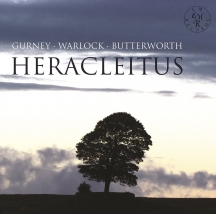 This CD commemorates and celebrates the talents of a golden generation of English lyricists through the voices of the greatest song-writer composers of the era. The lives of two of these, George Butterworth and Ivor Gurney, remain inextricably linked to the catastrophic 1914-18 conflict played out over the fields of Flanders. The poignancy of their songs, selected and performed by tenor Charles Daniels, pianist Michael Dussek and The Bridge Quartet, comprise an intimate journal, encapsulating moods of innocence and naivety, transience and despair epitomised by the poetry of Housman and Gurney's 1919 song cycle 'Ludlow and Teme'. The Bridge Quartet also introduces two World Première recordings. Butterworth's miniaturist Suite for String Quartet (1910) is a eulogy to the 'untouchable England' before the First World War, but also a perfectly expressed prophetic warning from a young man extinguished in his prime. Gurney's epic nine-minute Adagio (1925) is a moving threnody from a survivor trying bravely to express in music the pain of living on with the consequences of what he encountered.