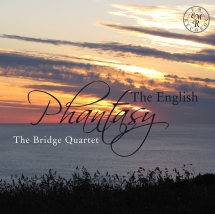 The Bridge Quartet's new release celebrates the rich variety of the Phantasy String Quartet, one of the forms most characteristic of the English Musical Renaissance of the early 20th century, and a genre re-invigorated by Walter Wilson Cobbett. The disc comprises six 'Cobbett' phantasies, based upon the single-movement (but tripartite) 17th-century Elizabethan viol 'Fantasia' model perfected by Henry Purcell, including three sparklingly carefree contributions from the very first competition in 1905 by William Hurlstone, Frank Bridge and Joseph Holbrooke. These are virtuoso scores from three confident young composers keen to impress with their knowledge and sometimes mischievously irreverent attitudes to 19th-century 'Romantic' idioms. The remaining three, by Gustav Holst, Herbert Howells and Eugene Goossens, date from ten years later, composed during the First World War. Holst's Phantasy on (Four) English Folk Songs is beautiful and nostalgic; Howells's prize-winning entry from 1918 is darkly tinted with an austere modality; and Goossens's contribution, dating from 1915, loosens the bonds of 19th-century tonality and challenges the listener with sonorities more redolent of the 20th century. Most of the works presented here are World Première recordings.