to an emotional breakdown. 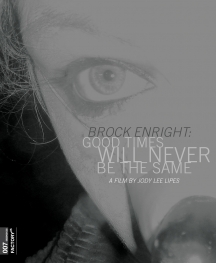 Artist Brock Enright packs a minivan and travels across the country with his longtime girlfriend Kirsten Deirup to create his first major New York City solo show at her family's cabin in Mendocino, California. Brock dives into his work, disregarding the gallery's mandated budget, schedule, and Kirsten's financial concerns for life after the show. The couple soon begins making an often violent and sexually graphic road film that pushes boundaries and sets the artist on an irreversible path toward an impending emotional breakdown.Once at the cabin, Brock works under Kirsten's family's watchful eye, and already mounting tension increases between the couple as Kirsten witnesses Brock's inability to manage the project and support them financially. When the gallery's director arrives to check on Brock's progress and finds his work barely started, Brock's already fragile reality further spirals out of control. The viewer must wonder if the episode is an artistic performance in itself or a genuine plea for help.