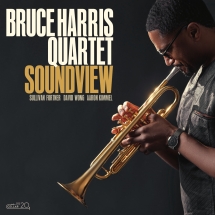 Two great sources of inspiration for me: my roots - the neighborhood in which I was born, Soundview, South Bronx NY, and my current Home Sugar Hill, Harlem.

Although it was not a place filled with privilege and opportunity, Soundview was and is rich in artistic excellence and indomitable spirit. Much of the music on this record was either composed and refined here in Sugar Hill. This record is a tribute to my family and community in the Bronx and to the black excellence that began in the Harlem Renaissance. I hope you enjoy!

Contrary to opinion, Jazz has always reflected the times. Sadly again, we are bearing witness to the racial injustice in the United States, wherein Black people's lives are constantly at risk, particularly by those sworn to protect its citizens. As harrowing as this is, there seems to be a dialog in which black voices are finally being heard. The Cellar Music Group recognizes that Jazz is not only a music native to America, but that the progenitors of this music are the very lives that are being threatened daily. I'm pleased to present the first of four releases led by Black artists that I will be producing for Cellar Music.
Jeremy Pelt

As someone who was born in Canada, who grew up here and who still lives here, I've been somewhat sheltered from the injustices going on south of the border. As a result, I have unconsciously used this as an excuse to not engage in conversations about racism and discrimination with my Black friends and heroes of this music that I love. I now realize that to be silent is to be complicit. This is no longer an option for me, and I stand in solidarity with our Black brothers and sisters.

A donation of $1250 has been made to Bronx Charter School of the Arts on behalf of Bruce Harris. Please check them out at www.bronxarts.net.

One of the five young players you should know

Paying tribute to his neighborhood growing up with production by Jeremy Pelt and encouragement from Wynton Marsalis, this trumpet man and his crew keep it moving straight ahead with steam engine ferocity. Solid work from a solid young cat...

...unaccompanied passage builds suspense and energy before the band comes back in, and he gets absolutely thunderous at the five-minute mark. Harris doesn't resist the obligatory growling mute, but also plays open horn on the track, quite effective