Bruce Liu was declared the first prize winner of the 2021 Chopin competition. 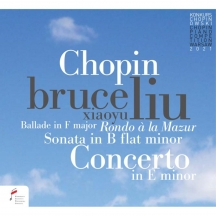 "There is a splendid tradition to the Chopin Piano competition chronicle; its latest manifestation is the Blue Series of recordings released by the Fryderyk Chopin Institute, in which, since 2010, they have been presenting portraits of the most interesting personalities - not necessarily the laureates alone--from successive editions of the Chopin Competition and selected archive recordings. October 2021 in Warsaw was a time of outstanding pianism and the general consensus was that it was one of the best ever competitions, in which we had the good fortune to encounter an exceptionally large number of fantastically gifted virtuosos.

Bruce Liu was declared the first prize winner of the 2021 competition and as is usual--indeed, inevitable--on such occasions, the results immediately became a hot topic of debate among followers of the Competition and between rival fans of different pianists, but it is safe to say that this was one of the less controversial wins in recent editions: Liu had consistently shown himself to be worthy of the prize.

His prize gave Liu a place in pianistic history as the first Canadian to win the Chopin Competition. From Glenn Gould onwards, Canada is a country that has produced many outstanding pianists.

This present recording is a second, broader chronicle of Bruce Liu's progress throughout the Competition. Playing on a Fazioli, in the Ballade in F major, Op. 38 he opens with warmth and poise.

Already looking like a potential winner as he went into the Final, Liu still had to prove himself in the Concerto in E minor, Op. 11, but in the event he had little difficulty standing out again.

He gave a completely balanced performance of the work, establishing his authority right from the opening statement yet engaging with its poetic imagination.

It was in every sense a winning performance."