Featuring Rich performing in a variety of musical environments, including some of Buddy's vocal outings 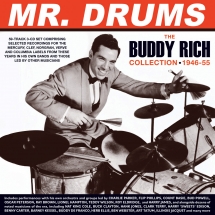 Jazz drummer Buddy Rich is famous as one of the most extrovert and impressive instrumentalists of his day, known for his virtuoso technique, power and speed, and one of the most influential drummers in the genre. Born in 1917, the son of a vaudevillian couple, he was immersed in the drums from a very early age, as well as being a singer and tap dancer. Having played with Artie Shaw, Bunny Berigan and Tommy Dorsey from the late 1930s, he served in WWII, he was with Dorsey until Frank Sinatra helped finance Rich to form his own orchestra in 1946. This 59-track 3-CD set comprises most of his studio recordings with his own band through 1946-47 for Mercury and on V-Disc, plus selected recordings through to 1955 with his own groups and with bands and small groups led by Charlie Parker, Flip Phillips, Count Basie, Bud Powell, Oscar Peterson, Ray Brown, Lionel Hampton, Teddy Wilson, Roy Eldridge and Harry James, variously appearing on the Mercury, Clef, Norgran, Verve, Pablo and Columbia labels. It features performances alongside many notable musicians of the era, including Nat King Cole, Buck Clayton, Hank Jones, Clark Terry, Harry 'Sweets' Edison, Benny Carter, Barney Kessel, Buddy De Franco, Herb Ellis, Ben Webster, Art Tatum, Illinois Jacquet and many more. Featuring Rich performing in a variety of musical environments, including some of Buddy's vocal outings, it's an entertaining showcase for his legendary versatility and prowess.