This new 4 CD release showcases some of jazz drummer Buddy Rich's most iconic collaborative works from across his career. 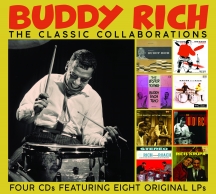 American jazz drummer and bandleader Buddy Rich, born September 1917, is still considered one of the most influential drummers of all time. Born and raised in Brooklyn, New York, he discovered his affinity for jazz music at a young age and began drumming at two years old! He began playing jazz in 1937, working with acts such as Tommy Dorsey, Count Basie, and Harry James. From 1942 to 1944, Rich served in the U.S. Marines. From 1945 to 1948, he led the Buddy Rich Orchestra. In 1966, he recorded a big-band style arrangement of songs from West Side Story. He found lasting success in 1966 with the formation of the Buddy Rich Big Band, also billed as the Buddy Rich Band and The Big Band Machine. Rich toured and performed until the end of his life. In early March 1987, he was touring in New York when he was hospitalized after suffering a paralysis on his left side that physicians believed had been caused by a stroke. He was transferred to California to UCLA Medical Center in Los Angeles for tests, where doctors discovered and removed a brain tumour. He was discharged a week later, but continued to receive daily chemotherapy treatments at the hospital. On April 2, 1987, he died of unexpected respiratory and cardiac failure after a treatment related to the tumour. His wife Marie and daughter Cathy buried him in Westwood Village Memorial Park Cemetery in Los Angeles. He was 69. This new release features 4 CDs of Buddy Rich's most iconic works from across his career, showcasing his incredible talent as the most influential drummers of his generation.