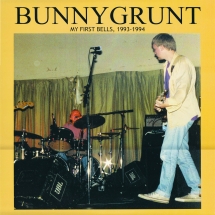 Bunnygrunt formed in St Louis MO in 1993 & has been putting out records & touring the world ever since. From their early lo-fi indie pop thru their current mid-fi garage pop, the band has been a favorite of the pop underground, occasionally bursting out to bigger audiences, like their tours of Japan & the UK, & their appearance on the soundtrack to the Billy Bob Thornton film "Bad Santa." "My First Bells, 1993-1994" is a visit back to Bunnygrunt's first two years. It features all of the songs found on their first four ridiculously out-of-print 45's, plus compilation & demo recordings, many of them previously unreleased or otherwise impossible to find.