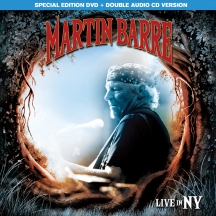 Martin Barre, best-known as guitarist in Jethro Tull - one of the biggest selling prog bands of all time - brings his famous guitar chops to the Big Apple in this rare concert capturing his solo band live as they rock thru the classic hits that earned him a reputation as one of the signature axemen of his era. This deluxe collector's edition contains a Concert DVD coupled with two Audio CDs of the entire concert, packaged in a gorgeous eight-panel digi pak.