An Accidental Landmark That Changed History 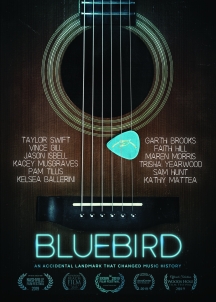 Discover the origins of megastars like Garth Brooks and Taylor Swift while following emerging singer-songwriters as they chase their dreams inside The Bluebird Cafe, Nashville's accidental landmark that has altered the course of music history. It's 35 year history is revealed thru never-before-told stories from those that have worked, played, been discovered and helped preserve this unassuming strip-mall haunt that is the bedrock of American songwriting.

Director-editor Loschiavo capably balances the household names (Faith Hill, Garth Brooks, Kacey Musgraves) and unsung heroes (open-mic hopefuls, songwriters little known outside the Nashville music community) in the cavalcade of interviewees who, with degrees of enthusiasm ranging from nostalgic to reverential, tell the story of an improbable landmark in an unlikely setting.