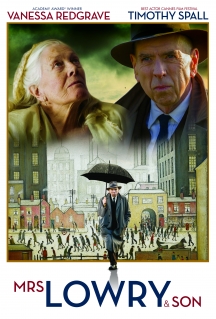 Beloved British artist L.S. Lowry (Timothy Spall) lived all his life with his over-bearing mother Elizabeth (Vanessa Redgrave). Bed-ridden and bitter, Elizabeth actively tried to dissuade her bachelor son from pursuing his artistic ambitions, whilst never failing to voice her opinion at what a disappointment he was to her.

Two Titans At The Top Of Their Game....Exquisite Performances

It's a bloody masterpiece, it's a film of such quiet beauty that I get quite emotional even talking about it

Within three or four short exchanges she establishes Mrs Lowry as one of the great maternal monsters of cinema, up there with Faye Dunaway in Mommie Dearest or Piper Laurie in Carrie.