Every Girl Loves Her Daddy 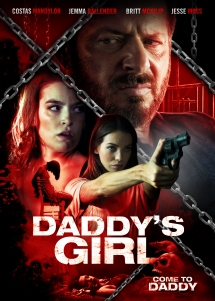 Zoe is a young woman held captive by her stepfather after the suicide of her mother. A former Abu Ghraib prison guard and now prolific serial killer, her stepfather trawls local bars using Zoe as bait to attract new, young female victims. A string of missing persons soon captures the attention of a rookie cop and a vigilante who both attempt to catch the evasive and sadistic killer.

An effective little thriller and a challenge to genre conventions

Daddy's Girl, within its genre context, is an efficient thriller which delivers its shocks in all the right places as it realises its modest aims.

Daddy's Girl is furnished with the farmhouses, hunting rifles, bear traps and chainsaws that define a very American brand of horror