Live From The Oslo Opera House 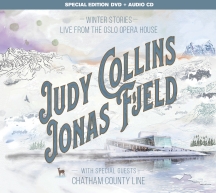 Judy Collins - along with critically acclaimed Norwegian folk artist Jonas Fjeld and masterful Americana band Chatham County Line - invite you to a hootenanny at the Oslo Opera House. Filmed in February 2020 off the tails of the newly formed groups' critically-acclaimed studio release "Winter Stories", the resulting live DVD and CD is a collection of classics, new tunes, and a few surprises.

Winter Stories: Live At The Oslo Opera House is an album that brings out the best of all participants - Judy Collins is in wonderful voice, Jonas Fjeld offers a dramatic counterpoint with the right edge of gruffness whilst the inspired combination of the duo with Chatham County Line adds a real connection back into Judy Collins' early folk routes