A.K. Tolstoy's A Taste Of Blood

After a Vampire hunt it's unclear if the hunter, who's also a father, has been turned into a creature of the night. Will his family find out in time? 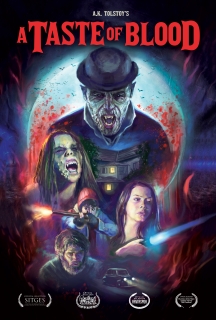 Based on Aleksey Tolstoy's 1839 short story "The Family Of The Vourdalak", A TASTE OF BLOOD tells the story of a man - who after going off to kill a vampire - returns home at the magic hour, between night and day. His family has doubts about whether he's still human or whether he's been bitten by the undead. His teenage daughter is determined to defend him, but their doubts and fears grow as the darkness of the night approaches. Will his family find out in time, or will their sentiment make them easy prey for the novice nightwalker?

A new spin to the Vampire genre!

Calvete directs masterfully and elevates the proceedings from an initial sense of unease to constant dread to mounting terror. He builds suspense and tension marvelously while escalating the family drama