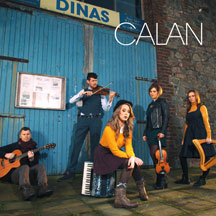 Flaming Reels and a Tale of Two Dragons. Fiddles, guitar, accordion and bagpipes explode into life on this fantastic new album by young folk Welsh band Calan. Infectious guitar rhythms and high voltage routines give way to beautiful and haunting songs. Amongst the traditional Welsh melodies and brand new original material, they breathe fire into the folk tale of Merlin and the Two Dragons. The title 'Dinas' is taken from the name Dinas Emrys, a mountain in Gwynedd, North Wales and during the 5th century it is believed two dragons once slept within the mountain hidden in the depths of a secret lake. During the night the dragons would awake and fight making the ground shake and tremor. When the Celtic King Vortigen attempted to build a castle on the hill in the 5th century the stones and walls were repeatedly shaken to the ground. The legend says the problem was solved by a nine year old boy gifted with magic. His name was Merlin and Wales had found a great magician and the emblem for its flag.